The Bastard Noose: Welcome to the Emergency Department 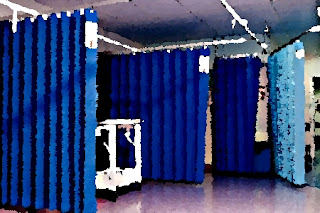 
This isn’t a story. There isn’t a beginning, middle and an end; however much I try to frame it like that. There definitely isn't an end, at least not one you'd like. These posts are thoughts, experiences and emotions told in whatever way my vocabulary and mood will allow me. Emphasis and tone will shift and I hope there’s something good about that for you.

Roll right up, a surprise every time.

After my admission to hospital, the Emergency department became my new home. The sick, the old, the lonely and the drunks. The mentally ill, too. It was frightening frankly.

Luminous and illuminating, the Emergency Department (ED) saw me quickly in a bay and assessed. Assessed, re-assessed, and once I'd accepted the idea of staying, wired up. Plugged in to some delicious saline-solution- water in my veins. Those awful, blue reminders of my failure drank like a rummy on shore release. They were thirsty; my heart rate was up and I was dehydrated.

I also wanted to vomit, but I'm unsure whether that was physical or mental.

A blinding light pin-pointed at your pupils- the environment of the ED was oppressive. I crashed into the sudden realisation that I was out of my depth; all emotion, fear and mood was obliterated. Despite the paranoia, loss of memory and inability to engage with people I only now realise I had, this was an overwhelming environment. So heavy for a "sick" person that even in my semi catatonic state, I jolted in to survival mode.

Like falling through the ice, it was sink or swim.

People streamed past me, I heard each and every human and their individual anguish, without knowing one. I felt their pain and desperation, but that pain fought against the beeps. Non stop beeps and their relatives which competed over the already noisy hubbub. People desperate for help and the medical staff rushing to treat them.

It was an unwanted experience but powerfully glorious and new in its own way. I felt like the first man to walk bewildered into fire. If I was twitchy before, the ED made me twitchier.

An audial assault. Piercing sounds in cacophonous overtone clashed in an ungodly way with the bright light that together shuddered through me. Through me and into my "room". That being three walls and a flimsy plastic curtain. More, through me and forever into my future, I think. You've never felt anything like it and if you have you won't forget it. It was both the least and worst of my worries.

I do not remember, after accepting the stay in ED until a bed in a mental health ward was available, having a single dark thought. I do not remember. Looking back I was in a sort of sensory stasis- I don't recall much.

Stasis was better than adrift. Lost and afraid. Stasis was safe at least and I learned to embrace that reasonably quickly, though it came as part of a learning curve as I'll bore you with in future. Bay 13 of the Emergency Department was assigned to me. Irony not lost even in my confused and angry state.

Announcements arrived relentlessly through noisy, unseen, speakers. Overbearing and with the crispness and charisma of a shopping centre lift. I assume the speakers were hidden because anyone there more than a few hours would decide decimating that Tannoy was better for them and humanity than getting stitches or antibiotics.

The system usually announced either a trauma arriving either through the roof or through the doors, but more often just requested a Spanish speaker. The inability to escape this environment traumatises resident's ears. My ears. This is not a place designed for residents, this is an emergency department.

Maybe that's why they have the four hour targets in the ED. It ain't designed for more than four hours. I was to spend the night- and just a little more. Welcome to the ED.
Accident and Emergency Adam Thorn Writing Death Depression ED Emergency Department Experience Gallows humour London Mental Health Mental illness NHS NHS Mental health Self involvement True story