Ensure: For Oral Use 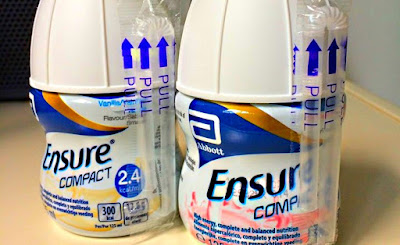 For the dietary management of patients with, or at risk of developing, disease-related malnutrition. For oral use.”

Disclaimer: For all my flippancy and pissing around making jokes in this piece, Ensure do exist for a reason and there is no doubt their medical purpose has helped my Grandad- and many more. I certainly don’t intend anything other than a lighthearted look at a dark subject here. As well as an obscure review. Plus my Grandad has a sense of humour.

First up, let’s address the fact that they had to state Ensure is for oral use. I’d hate to be the terminally ill person who found that out after an Ensure enema.

"I can't taste the strawberry".

I’d never heard of Ensure before. I guess word of mouth doesn’t count for much when you exclusively sell to the dying. They’re essentially palliative care milkshakes, liquid calorie intake for those unable to consume solids but in need of sustenance. A depressing enough situation to be in. I know I’m not terminally ill but I do have depression and we’re all dying technically so that’s my excuse and I’m sticking to it.

Alongside my constant culinary inquisitiveness, there’s your reason. I’d had my eye on the stack of Ensure at my grandparent's for months, fascinated by the Sci Fi possibility of a meal replacement drink. Yes by taking one I was literally taking food off my Grandad’s plate- but he still has a six month supply (a stockpile even he admits is “ambitious”). He’s so much better now that he walks around, eats, jokes and complains about shit, which is how people know I’m well.

Grandad graciously offered me three flavours of Ensure: vanilla, strawberry and banana. My enquiry as to whether there was a bacon flavour was met with a cold stare. I hate banana at the best of times, so vanilla it is!

These things are 300 calories in an 125ml drink. They’re a meal a piece, Ensure, if your minimum calorie intake requires toast with Marmite. They do not have Marmite flavour either. My current corpulence does not require a 300 calories meal replacement drink, but fuck it I’m lazy, depressed and it’s far too late for the beach bod now.

My Grandad’s lovely nurse assured me that with some ice Ensure are most palatable. Ensure with ice is something I imagine is also best taken orally. I suggested a shot of vodka too, but she doesn’t drink and I didn’t know that and the conversation died faster than, well faster than someone not drinking their Ensure. Obviously I’m still going to try it with vodka. I just won’t tell her. 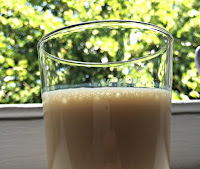 Tidy packaging, I’ll give it that.

I don’t need a straw but I understand why it is there. Conversely a Ribena with no straw, well that’s just pure sadism.

Christ it smells awful, sweet and sour and not in a “don’t ask don’t tell” Chinese takeaway-way

Before the start  I realise I don’t actually know what vanilla is. A vanilla? Is it a plant? Is this just blended vanillas? Vanilla, vanilla, vanilla. It’s like my ex regurgitating our sex life. With Ensure you'll miss food more than sex.

The consistency is like trying to drink vomit. Trust me after the Derby Rugby team’s initiation I know what drinking vomit is (thanks Belfast Ricky).

I whack vodka in almost immediately and it is better, due less to the booze (though that helps) than the watering down. After a few experimental pours I settle on about 2 parts vodka to 1 Ensure.

You will need a nap to sleep it off if you follow my vodka ratio. Avoid driving and heavy machinery.

Ensure finished and while it is unpleasant I cannot tell you if it is less pleasant than death, and nor can anyone else. That's why it exists, to keep someone existing and I now have another reason to be glad my grandfather is now well enough to eat solid food. So does he. I love him and I think  Ensure was the least he persevered through.