The Dead Are Coming: Jim and the Old Man, Part 2 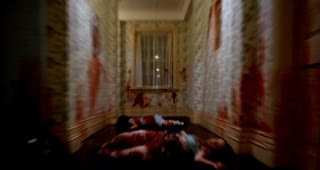 “We really should go and see him.”

“He don’t want to upset you. Give him time. What have you cooked?”

“The custard is for dessert.”

He still looked less than impressed.

“How much food have we got left?”

Agnes leant over to whisper in the man’s ear.

“Between you and me it’ll be blessed relief when we have fewer mouths to feed.”

Agnes was definitely more in touch than she was letting on. This angered him. Maybe it was her way of coping, pretending to be dotty. Crafty old cow. What else was she hiding from him? Food maybe? He hadn’t been checking. Stupid old man, too nice. The three of them stood in the kitchen, staring blankly and silently at each other for a moment.

“Set the table for four, I think Jim will be joining us for dinner.”

The old man performed his door dance again and left the room. Briskly down the hallway he unlocks Jim’s door without calling for him first and shuts but does not lock it. Jim lies straight in bed, but turns over as he enters. The two share a long silence.

“Pull down the boardings, I want to see outside, as I am, one more time.”

The old man dutifully does so, opening the curtains and pulling down the damp cardboard and plastic bin liners that have been keeping the room so secret to outsiders. The condensation on the windows lets the fading but still bright light in. The clear winter sky a frosted blue and pink impression of its reality.

“Well, as far as I can see old boy, you’re going to have to speed my end up a bit. Then let me turn you once I have myself. It is not as easy your end I’m afraid. It’s in me already.”

“And, the quicker you can get it in your system and pass over yourself the better.”

Jim wiggles a hand free of his duvets and signals to the position of the vein on the neck. The old man let a small, tired laugh out.

The old man pulled lit up another cigarette, and gave it to Jim, who smoked in silence. The old man had one himself. He'd miss smoking. Or would he? Would he be aware? What level of his personality would remain, he wondered. Was it anger, the dead showed, or simply hunger and desire for life. They finished their cigarettes and held each other's gaze. The old man went to speak, but Jim's look discouraged him.

He gently pulled a pillow from under Jim’s head. Jim closed his eyes as he did, his breathing slowing and deepening as he prepared himself for this insane idea of his. Holding the pillow in both hands the old man paused as he held it above Jim’s face. Is this a good idea? Hold on. He opened the unlocked door behind him. Jim opened an eye.

“Easier to get out when. When.”

He picked up the pillow again. Looked Jim in the face, smiled weakly and pressed down. Hard, with all his weight and strength making sure to block both nose and mouth from air. Jim struggled weakly and briefly then stopped moving altogether. The old man kept pressure on for another minute, then sat back himself. Nothing. No movement. He had a sudden thought, reached for his cigarettes again. He’d barely lit it and inhaled when Jim sat up, the pillow falling off his face and unveiling his new façade. Grey, like before but blank and calm. Still, almost. He turned to the old man raising his arms free of the covers. The old man’s smoke dropped to the floor from his lips. Quickly he stamped it out and stood up. Pause. No, no pause, Jim moved at him quicker than he’d thought him able. He was out of bed and moving with the vigour of a young man, an angry young man. The old man pushed Jim’s reaching arms aside and thrust his neck at his chattering jaws. This had better work.

As Jim tore through the side of his neck the old man let out a howl of pain and pushed away, falling over as he did. Blood shot through his fingers and on to the far wall and bed, it looked shiny and crimson in the light from outside, not black and dull as he was now used to. Writhing on the floor clutching his neck he could feel the life rushing, sprinting out of him. But Jim wasn’t done, he fell over as he came at the old man for seconds. Crawling towards him on the floor as the old man slipped in his blood pathetically trying to get away. This wasn’t in the plan, he was supposed to turn him, not eat him!

Desperately, the old man kicked Jim off him, pushing himself further away from the bed, sliding around in his own gore as his consciousness ebbed away. The blood from his bite was slowing now, not long, not long. Jim got off of all fours and stood up precariously. Steadying himself and looking down at his meal he let out that moan, the moan they all had. A low, animal like growling noise. A hunter’s signal. The old man just managed to turn around and push his back up against the front wall of Jim's room, facing the bed and Jim's reincarnation. He was fading, passing out, but something different, something strong, raged through him. Jim lumbered toward him, focussed. The old man blacked out.

Agnes was pottering under the sink looking for something and muttering to herself. Ethel was still trying to open the tins they were going to serve, cold, for dinner. Ethel noticed Agnes’ rear end protruding from the cupboard.

“Are you Okay? What are you looking for?”

Through a mouthful of the chocolate bar she’d just found Agnes responded.

“Oh… Nothing, I was just looking for some cleaning things. This place could do with a spring clean.”

Agnes stood up clutching a dusty, dry old cloth. Turning the sink on to rinse it produced a loud metallic klunk, and a few spurts of water.

“Ooh we should call the council.”

“Yes, we will. Have you got those tins opened yet?”

“Almost. Actually do you mind? My hands are too cold.”

“Of course not. Set the table up would you.”

Ethel staggered over to the drawers and began her futile efforts to remember where the cutlery was kept. The room did not have much in the way of a table, just the unkempt metal preparation counters.

A knock on the door.

“Is that you dear?” Agnes waddled like a fat duck in her layers to the kitchen door. It was locked.

“It’s locked, have you forgotten your key?”

“Who is it love?” Ethel asked, heading toward the door herself.

“It must be Jim and Mr Grumpy. They’ve forgotten their key I spect.”

“Oh yes, where did he put it? Hold on a second gentlemen I’m just looking for the key.”

Now a scratching too.

“Now, now boys we’re looking. Ethel dear look in that drawer would you?”

“Oh right. Yes I think this is it. Is that the right one?”

Ethel wandered over with the key at a leisurely old lady pace. Before putting it in the lock she paused.

“Are we, supposed to check first?”

“I’m not sure, I remember grumpy saying not to just let people in.”

The banging stopped. The low moan again, in harmony.

Agnes's ear pricked up at the moan and she dimmed her eyes. She knew that sound, she thought. Yes, she did. She knew what it meant. She turned to Ethel,

“You’ve got the key. You open the door.”

Ethel fumbled with the key in the lock as the door bangs. She is unable to unlock it. Agnes sighed and stepped forward.

“Give it here love.”

Agnes turned the key the correct way up, put it in and unlocked the door. She reaches for the handle.

The door handle turns and the door almost bursts off its hinges with the two dead men’s force. The corpses bowl in, knocking the ladies over. Agnes and Ethel scream, but only briefly.