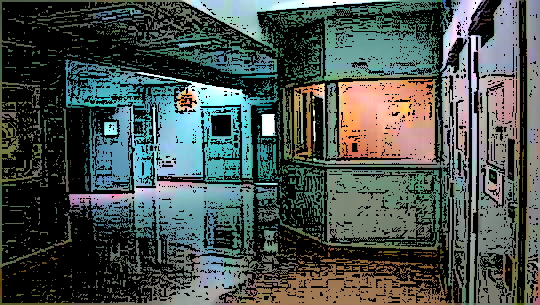 I hated writing this post. Originally it was all in the third person, but I decided it was too detached and out of line with what I've written of The Bastard Noose so far, so changed it to this; which I'm not sure is better. Going over my notes from that time a year ago, it is pretty obvious I was in a weird place, literally and metaphorically. The tone and my engagement with my experiences bounce around some.

After eight days I finally got what I wanted, a transfer to a mental health ward elsewhere in London.

CLICK HERE FOR EARLIER PARTS OF THE BASTARD NOOSE

After darkness had ripped the bright lights of the Emergency Department from my eyes, I was thrown into the sensory stasis of a hospital transport van. Dull blue light sat coldly in the back, the quiet journey through a seemingly empty London indescribably lonely. Although I had an ascribed escort in the back with me, he said nothing and neither did I- choosing to stare disengaged at my phone.

The phone was fully charged because transport informed me that in a mental health ward they take phone chargers away from you.

This was not the only advice I was given by them, they were fairly frank and while I was grateful for their candour, it was mildly peturbing knowing how many freedoms I’d be giving away. No chargers, at all, my cigarettes, lighter, electric razor, deodorants and anything the determined person might harm themselves with would be locked away, access only granted with permission. Items checked in and out.

“Keep to yourself, have a look around and don’t give too much away until you know people. Only say hello if someone says it to you.”

I’d never been to a mental health ward before and the closest to prison I’ve ever got was a night in Belgravia nick*, although the man in the cell next to me that night did have to be put in a straight jacket, so I suppose that was a little bit of both. Nonetheless, this was a little bit different to “like a Travelodge but with mental health patients” I was told to expect by a doctor during my Emergency Department stay.

As an informal patient, which essentially means I’ve been referred but not committed, I would have more freedoms than the formal patients, but still a vastly diminished amount of leeway than in the ED. Until assessed I would not be given any, though, and as I was arriving late at night that meant until the next day. I could already feel myself getting tense.

We pulled up at about ten pm, it was quiet, dark and in complete contrast to the clamour of the past eight days. I suppose you could call it tranquil, but that’s me looking back. At the time it was a haunted house to me; I didn’t know what to expect but was expecting the worst. Unseen horrors. I wanted a smoke, but was escorted to the ward by transport who said after I’d been logged in I’d be allowed one.

Led through two sets of security doors, the ward I was to live in's reception doubled as a kind of nurses station. I was put in a room facing it, with glass walls and all its lights off. The least welcoming sitting room in the world. Everything seemed to happen in silence as transport handed over and buggered off, their job now done. 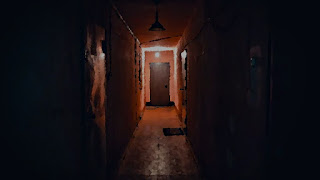 The dark and atmosphere made it feel like fifteen or twenty minutes before someone came to see me. I was taken to be weighed and have blood tests and height checked and answer more of the same questions I’d answered daily for the last eight days. Afterwards, I was put back in the haunted sitting room, with its monsters lurking in shadow. The silence was killing me, I had no one to talk to, not even a nurse.

A large man stormed down the hall, clearly enraged at something, slamming doors. I looked for a darkened corner I could join the ghouls in, wanting to shrink away, to hide. Suddenly silence seemed superb. You can hear silence, one of my old teachers always used to say. I could barely remember silence as this tall, well built, very angry man paced up and down, ignored by the few nurses I could see in the station. Was this normal?**

Eventually I was told to follow someone to see the duty doctor, I asked about a cigarette. “No, tomorrow maybe.”

The doctor’s office was at least bright and had a shut door between me and the man outside. I ran through another set of questions I knew the doctor had the answers to in my notes. I had made the wrong decision opting for an indeterminate time on a ward. I should have gone home.

At least they gave me sleeping pills.

*Although an embuggerance, I thought the enforced experience was quite reasonable. £80 for a short notice stay in an en suite room in Belgravia? And I got room service (cup of water) and a blanket. I did have to submit my DNA, but then I was doing that on a daily basis in hospital, too.