The Space Between Trees 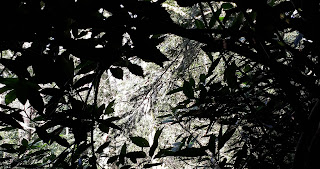 When my son went missing, I was horrified. How do people get lost in this day and age? He’d never been a tough kid, he played sports, sure. But he wasn’t a leader or a game winner. I wasn’t ashamed of this part of him, I should say. I wasn’t ashamed of that, because that part was what he got from me. He had his day, few tries here and there, occasional game where the other players, children really, would pat him on the back. That was pride, for us both. I suppose.

Not without his difficulty is kind. Is it kind? He has a bad mood. That’s not the right words. He has an inability to have consistent mood. In that sense he wasn’t normal. Isn't normal. I don’t think. He was like a ship in a storm, always struggling to rectify the ballast, to equalise. Always rocking, overcompensating. It was horrible to watch, hard to be around. It was awful to be around. He’d puff his chest out and go about his day but I could always see he wasn’t ok. What could I do though? He said he was fine.


One day he announced he wanted to go to Vietnam. It was easy to get teaching jobs out there if you were English, he said. It would cost money. Money put aside for him, our money, I suppose. But we were happy if it made him happy. Or happier. We weren’t to know. Neither was he, really. Who could know? So off he went with our blessing. And as much as I hated putting hard earned money into a whim I was happy for him, for a brief while. It wasn’t that we didn’t hear from him. We did.

Sorry I have just realised I’ve wandered away from the topic.It’s easy to get sentimental, I suppose. Apologies.

It wasn’t the first contact, or any of them in particular really. He was very communicative. Very engaging, very respectful and thankful of this gift we had given him, and more than him. It was the tone. He was “helping those more in need”. As if he hadn’t borrowed money to be there. He was making sure people in the area were not without. It sounds awful, doesn’t it? Thinking this is a bad thing. Posing by buildings he claimed they’d built, or with locals hugging them. Trying to assimilate with people who neither needed nor wanted them, for the sake of their, his, own conscience. Rectifying a wrong done miles away, years ago, which no one at home knew about, but to be approved by the people that you’re running from. Us.

It was sick to me, didn’t sit right. Perverse. It was against character, I suppose, and that’s when the real seeds of doubt were sewn. He’d changed. I think. Do people change or are they always themselves? Always lurking and hoping someone friendly spots them for who they really are? All I know is over those few weeks I lost my son, as I knew him. I found that hard. And I wasn’t entirely fond of what I thought I knew before. Which I promise, is far from the worst thing you will hear. But that was just the start. Now we’re here.

“Well, if you want my opinion”

He began. It was a figure of speech. I'd paid him for his opinion; but it was annoying, too. I'd never met the man, but doctor O’Reilly struck me as a pedant. It was probably an advantageous personality trait given what I was paying him for. But it annoyed me.

He paused. I took the hint unhappily.

“If you want my opinion, he's scared. Scared and definitely traumatised.”

“But, actually. Scared and traumatised, but, not insane”

“That depends on what you mean by good news”

When I finally met this man, I was going to punch him.

I said, and lit a cigarette

“Well it is good news for his long term recovery, which I might add in my opinion will still be a significant period. But may not help his case here with the authorities.

This is a place of strange stories, ritual belief and a pathologic devotion to the earth around people. The importance of the land. You have to remember that.”

I was definitely going to punch this man. I began visualising it.

“Mr Marks, are you still there?”

“Yes, sorry. I don’t understand what you mean, does this help his case?”

I imagined his nose breaking under my knuckles. Even in my fantasy, I knew I was taking a chance he was less physically capable than me. I could cold clock him, I suppose.

“Ok, psychologically, does this help his case?”

“Honestly, not really. But it might with some pressure from the WHO or perhaps your Embassy. Vietnam doesn’t have great mental health, how can I say, awareness? Understanding? At least from a legal perspective anyway.”

“So you do know legality?”

“I know how medical diagnoses fit within the legal spectrum. I am not a lawyer, I can tell you my opinion of your son, which I have. I can also tell you that my opinion, which I explained when you hired me, is unlikely to be taken into any sort of consideration until your son is placed on trial for murder.”

“Please go on, doctor. I’m sorry, this is all very stressful and I’m sure you can understand…”

I wasn’t sure he could understand,

“I’m sure you can understand, is not something I’ve been through before.

“It’s fine. Id assumed the chances you had two double murderers in the family were unlikely.”

I wanted to smash the phone so badly it hurt him in Asia.

“Allow me to explain more.”

“Your son is being held as insane. You understand that?”

“My diagnosis is that he is not insane, and it is highly likely, in my opinion, that he wasn’t at the time of the… deaths.”

“However, as you know, given the, how shall I say, circumstances of what happened, and given the on record history of your son’s mental health which Vietnamese authorities requested and have seen…”

“He had depression! That’s not mad!”

“The Vietnamese authorities have more power over your son’s detention if he is defined as insane, and his history of depression, married with the, frankly, brutal case details make it quite easy for them to assert this. Added to that his bizarre description of events… I mean. Look, he certainly sounds insane.”

“Correct. But I understand why the authorities here have decided he is.”

“Please stop apologising. I can’t share any of the evidence with you, I would say ‘I’m afraid’ but it isn’t pretty. However I can send you the tape recording I made of my time with your son. Which has his version of events, in his voice, which you may find comforting. Then you can make your own mind up about the next step.”

“Doctor that would be brilliant, thank you.”

My fantasy of punching the man subsided.