Las Vegas: Can A Chad Swing My Vote? 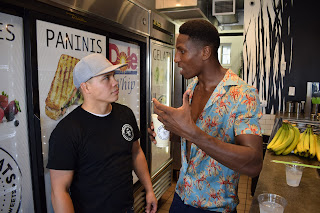 Boxing has been my staple while staying in Las Vegas. It has sustained me, given me meaning and distracted me from what Vegas appears to be. Despite all the fun I've had with the boys and things I've experienced which I wouldn't in the UK, as you've probably guessed, Las Vegas ain't somewhere I was built for. Except the weather. Man I love that heat. The guys (Josh and Asinia) had been getting up super early to do some training which sounded super good for them, but super boring for me. Despite being a boxing nut I have disabilities, and one of those is not giving a flying fuck if no punches or egg shaped balls are involved*. As well as not liking 5am.


However, as my second post covered, I quite like Downtown. It’s not the strip; it’s more human. Despite that the routine of my being annoyed by Las Vegas’ traits continued, along with said annoyance being abated by the things I love and am here for. Namely boxing. It certainly isn’t the good food. The Seps have cornered the market in criticising us Brits for our cuisine, but I didn’t see more than a cunt hair of lettuce until about day 10. So shut it, hypocrites. They hire scooters to get around the casino. Scooters! Some of them weren't even obese, it was clearly just an aspiration.

Josh and I went back to Downtown, where things are great, to visit the shop he'd been on about since we left London. It is a health food place, by and large, and while I'm not overly impressed with the cuisine here, smoothies and “cleanses” aren't really my thing either. I fall somewhere in the middle. I like a salad, with a steak on it. Super-foods sound like a misnomer to me. We arrived at Smooth Eats after yet another tense taxi journey where despite us knowing where we were going, the guy tried to dupe us out of more cash by taking the long route. I'll come back to Vegas taxi drivers anon.

In Smooth Eats we met Chad.

Chad is a pro boxer, currently on a break due to having a wife, family inbound and setting up several rather lovely businesses. He’s a resident of Las Vegas and he’s also a friend of Josh who met him on a previous Hellraiser trip. Chad's a whirlwind of fun. Within seconds we had a shot of a ginger concoction he'd made which was amazing. I love ginger. Then some dole whip which quite frankly rocked my world. A bit like a pineapple sorbet which is also free of all the main intolerances, Unlike Charlottesville. Then a lovely turkey sandwich, it was all delicious. Wonderful food mixed with the warm intensity of Chad’s company.

Something weird happened, I began to relax. To unwind. As Hollywood Josh and I sat in the sun, eating our sandwich, I thought maybe I could like Vegas after all. Chad then brought us out a bowl of nutrition that fell somewhere between a smoothie and granola. It had blue spirulina in it, which to a noob like me may as well have been unicorn powder. I mean, what on earth is it? In England I'd never order it, but one spoonful and my body just said, “yes!”. It was delicious, healthy and my mood continued to brighten.

The next day was Sunday and all four of us joined Chad and his lovely wife Lindsey, who's English too, for a delicious Brazilian lunch. What was hilarious given it was an all you can eat meat joint, was they had a whole buffet of salad and veg. Those of us not resident to Nevada attacked the vegetables with gusto, ignoring the space needed for incoming cow and pig carcass. Simply excited to eat “fresh” at last.

“They have broccoli fam!”

We hung out with Chad and Lindsey a lot more before over the next days. Knowing someone who knows where you are is invaluable. Not only is Chad and Lindsey's company great on a simple human level, but they understand the area and difficulties which come with accepting it. Chad is an ex marine, and has a story to tell: several, in fact!

Concurrent to our friendly exploits, the boxing side of things had been going well, both guys were improving, looking sharper and sharper. Josh banged out two guys in a row, and Asinia's spar with Tank had made the Sun in the UK. Great exposure for him and Hellraiser, and source of pride for me as it was my reporting and pictures which were used to construct the piece. Politics aside, and isn't that the beauty of sport, that it is aside from politics, the Sun support and cover boxing better than pretty much every other British paper. Broadsheet or tabloid. Hellraiser are a relatively small promotional company; it's great for us to have their interest.

Finally, as the lads were all unsure about it and the money it entailed, I went shooting. While I hate what guns do and are used for, the fact is that they exist and I rather enjoy firing them. Las Vegas laws allow one to fire fully automatic, as well as high calibre weapons. I shot a sniper rifle and a sub-machine gun, and honestly loved every second. It really is something you should try even if you don't think you'll like it, us Brits are happy to go shooting clay pigeons but scoff at other forms of the same hobby. Guns are fun, when shooting at targets, just not people. 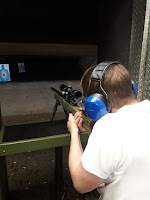 While getting noticeably fatter, much poorer and a little tanned; I was warming to Las Vegas. This was in no small part due to the company around me, all of it. Asinia is uniquely hilarious, Josh and I have a good rapport even if he does complain I'm like his mum (who I imagine had the same issues getting him out of the house on time) and Mickey continues to adlib Mickey-isms which I need to start jotting down! Chad and Lindsey are a hugely welcome addition to the set.

Additionally, the fact that they don't pay state income tax (meaning they save 35% of their wage compared to other states) mixed with low rental costs and the amazing weather made me actually rather soften to the idea of Las Vegas as somewhere to live. But then London is expensive and shitty and wet and yet simultaneously the greatest place on earth. I'm so conflicted, my main complaint now is that from a writing perspective I'm less able to rant when I'm not grumpy. See what the grumpy does? Do you see now? Bastards!


*Whatever Asinia says about my sleep pattern! It is funny being around blokes this intensely, you see their routines and all have opinions on each others’! I am an 8 hours a night man. No siesta. However I’m not training like the lads are.
boxing food friends guns healthy eating Hellraiser boxing Las Vegas taxis Travel writing