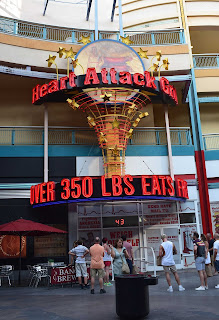 I am now unbound by writing for work. So expect more expletives, and honesty. All my own opinion, with added grumpiness.

Our long walk on the day of arrival around the epicentre of the madness that is Las Vegas taught me that while the Strip is a marvel, it is not marvellous. I don’t like clubbing or shopping and it is essentially one huge hybrid of those things.

However, there’s plenty more to Las Vegas than the strip. I hoped. I had to hope. I was raised Catholic, it’s all we had, and it has stuck. Before I could explore beyond gaudy ground zero, though, I had to contend with a sore throat and a general overwhelming feeling of lethargy. I've never travelled 8 hours (and arguably 40 years) into the past before. We went to the gym we’d wandered into on the Thursday evening on Friday, and beforehand got some breakfast at a diner/ burger type place. I had already worked out that eating was going to be a problem for two reasons. Firstly, I have lost a stone and a half lately and would like to not undo that hard work; they put cheese on salads here. Secondly, and more importantly, due to the pound being weaker than a hospice tug ‘o’ war team everywhere is costly to eat. Everywhere.


I refused to spend £20 on breakfast and instead snuck off to Subway after the others had walked off. A 6 inch chicken (no bacon) sub and a bottle of water set me back $10, so almost ten pounds. Add to this scenario that due to the fact that no fucker cooks in Las Vegas apparently, there aren’t readily available supermarkets where we would have Tesco’s Locals and the like. Saving money is not really an option. We went to a 7-11, and five litres of water and a pack of beef jerky was $18. Not even mineral water might I add. PURIFIED water, like that’s a fucking thing. Sort it out, Vegas.

I swear because I swear down.

My disdain for the reality of eating takeaway for two weeks at extreme cost, mixed with my generally feeling under the weather must have taken its toll, as I didn’t really even have much energy to watch, read or write about boxing, which is unusual. Things were dire. I even thought about coming home early.

But, it was my roommate for the trip, Hellraiser fighter “Hollywood” Josh’s birthday on Saturday, and he wanted to go to “Downtown” which is a named district in Las Vegas, not just a generic name for a town centre. Having eschewed the clubbing because I felt ill (and hate clubs, I think I mentioned that) I felt I should join him, as Mickey and Asinia were sparko in bed, and my logic was that it couldn’t be any worse than the strip. Josh and I set off mid afternoon, and walked the 3 or so miles in 35 degree heat in something of a good mood, which only picked up, and up, and up when we realised what we were doing.

Although it will never rescue Las Vegas for me, Downtown will redeem the Vegas fallacy as an actual destination, which frankly is all it parades as anyway. This is the area the old school went to gamble, where the new money hasn’t corrupted. Completely, anyway. Downtown, or Fremont Street, lands somewhere for Brits between Piccadilly and Shoreditch, It’s tourist bait, but with more soul than Vegas manages in every other area I've seen. Which is not a lot, but I enjoyed my time downtown. The people are more relaxed, the traps are as subtle but more avoidable, less in your face. Also, we went and watched the Vasyl Lomachanko fight in a bar there, which was fun to have done. Love of boxing returning definitely a good sign given I've two more weeks of it.

In short (which is all I can do) Downtown is the least cunt-laden, most chilled Las Vegas you’ll get. But bare in mind Las Vegas is for Cunts, by Cunts. With a capitol C. But wherever you go expect to lose money, and I don’t mean solely by gambling, you’ll have to haemorrhage it simply to get by.

From day one Las Vegas has unsettled me. Downtown has made me realise it has emerged from a place which while not perfect, wasn’t as awful as now. If you base something on money it’s setting off on the wrong foot. Las Vegas set off on that foot from the word go. It was always going to be this way. Think of the Strip as a western Dubai and you're close, it's pointlessly showy. I'd never go to Dubai, even for boxing.

O.K. maybe for boxing. But that's all.

At least I know now. I spoke to a friend who lives in the USA, and is well travelled within it and a huge fan of the place overall. He described Las Vegas as “everything I hate about humanity”. Due to stay a few days, he left after a few hours. He didn’t see Downtown, though.


As it is, I’ll be heading back to Downtown, just to keep my sanity. There’s also plenty of boxing to watch and it’s rather lovely and hot, which helps. However, I can’t help feeling that any trip to Las Vegas is just footnotes to Thompson, and football season is over.
boxing Las Vegas Opinion Travel USA writing
Location: Las Vegas, NV, USA