Las Vegas: The Good, The Bad, The Weird

Las Vegas: The Good, The Bad and The Weird 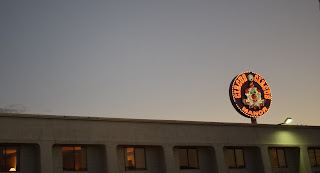 
The Boxing
I mean, just obvious this one. Talked about throughout my other posts. Sustenance.


The Weather
English people love a moan about the weather, “Oh I like it hot but not this hot. This is too hot.” Stay in England then, and have the weather you deserve. I like it 30-40 degrees and in a country which is actually set up to cater for it. I'd probably pick Greece over the USA though. Maybe. I haven't thought that through. I loved going for little walks in the heat.


Flying Virgin Atlantic
They’re just really good. Way better than Delta, which I know is a low bar, and I'm aware Branson is single handedly buying out the NHS. Whatever, I'll take my free wine as (partial) compensation. More wine Branson, you dick!


Smooth Eats
Their ginger shots there I’ve have unsuccessfully tried to recreate at home. They are amazing. The best and healthiest food all holiday, with good company. I loved being there. It's in Downtown, too, which you may remember I liked.


Second goes to the ribs at Tatuado, even if Josh and I were harassed by an over made-up octogenarian to spend ten dollars on the pleasure of singing in front of the other diners. The ribs were damn good eatin’. Wine list left something to be desired, though.


The Company
I've talked about the Hellraiser entourage already. It was fun hanging around with so many other people similarly so into boxing. Chad and Lindsey. People such as Sam Fleetwood and his guys from Bulmershe gym, Tyler may turn out madder than Asinia!


Dante was great value, a coach who helped Josh and Asinia out a lot, he'd say hello with a right handed handshake and a left to the liver. He was fun to be around, even if he did keep trying to get me to invest in bitcoins.


Guns
I like guns. I like being allowed to almost unsupervised fire big-old guns at paper targets. I would rather it didn’t cost so much, though I accept there's a tourist tax. It's great we don’t have them at home like they do in the USA, don't get me wrong, one taxi driver waved a loaded .45 around on one journey. He was being nice but it was pointed at Sam and there were two kids in the car. Kids who said driver gave a live round to as a souvenir. Sam wisely advised leaving it the bullet the USA.
Talking of taxis…


I’ve sandwiched this bit so as not to seem too negative. I’ve also limited myself to a maximum six(ish) “bads”.

Taxi Drivers
These thieving Las Vegas taxi swashbuckling shitcunts should wear masks and striped jumpers. The only honest thing about 95% of them is that they 100% will steal from you, and then ask for a tip for the pleasure. We got to the point of being pretty rude to them by the end, forgetting they often have loaded guns. Las Vegas taxis will take you the longest, slowest way, even when given clear directions ignore them, and when told, “we’re getting out here” will mishear and go around a corner. They will always expect a tip.

Avoid them unless desperate. Get an Uber account before you go. Make sure all your party has it though or you’ll be the only one getting the bill!

The Tax
They don’t put it on the prices, so what looks cheap isn’t so much, then don’t forget you have to tip. As in for everything, pretty much. But then what said a cool, even, ten dollars is actually about thirteen, uneven dollars, and the server will handed you... coins.

The Money
The notes all look the same, so counting it out takes bloody ages as there's no colour and size system, and you’ll end up with a bucket of completely pointless change. Even the beggars, of which there are many which is sad, turn their noses up at the coins. The money doesn’t even have our glorious Queen on it, I mean what gives America? A colony without the Queen on their...

The Food
While there are exceptions, and I’m sure many fine restaurants in Las Vegas that due to my spiralling budget I didn’t attend, a huge gripe is the absence of fresh food from convenience stores. Everything else affordable on or near the strip was not remotely healthy.

Yes you can buy pot noodles or a bad sandwich in Walgreens, but if you wanted a Co-op/Tescos type place with an apple, or some onions or peppers to add to the pot noodle, or a salad? Shit out of luck. They’re out of town, hidden away. While we’re on salads, STOP PUTTING FUCKING CHEESE ON SALADS! (Unless it is shaved parmesan). I asked in  a boxing gym where to get a good salad in Vegas and he said, “like, healthy? Oh no no they don't do that.”

Crossing the Road
They have huge, wide roads in most of America, and Las Vegas is a particularly bombastic example of them. Roughly seventeen lanes on each side, thousands of miles in each direction and once every mile or two there’ll be a crossing. Expect to add double to all walking times. This ludicrous system is setup to punish you and make money. It is not possible to just cross anywhere as they have a thing called Jaywalking, which carries a $500 fine and they love to enforce on tourists.

At crossings you have to push the button and wait. And wait. And wait. Then run across really quickly because you only get ten seconds! Little old ladies must be getting hit every day in Vegas. I bet the local Boy Scouts just look on sadly as drivers turn their wipers on as granny disintegrates into mist. Still, beats listening to a Donald Trump speech, eh.

Fluid Ounces
What. the. fuck.

Floyd Mayweather
He’s divisive, yes. I have mixed emotions about him, like many do. But he is very good entertainment to be around, even when he’s laying into you and your country. He orchestrates the gym like a foul mouthed Ringmaster, creating a unique mix of hostility and good cheer that I've never experienced anywhere else.

Restrooms
The Americans will do anything to avoid thinking about genitals or bodily functions. Asinia couldn’t understand why they looked at him like he was talking Swahili when asking where the toilets were. They wouldn't answer because they won’t call toilets that (they know full fucking well what it means, I’m sure of it). It is not a restroom, I’m birthing an otter not having a nap. The seat covers they have for sanity are just darling, too.

You poor, poor things. Come to England, I beg of you. You’re not a man until you’ve had a poo on a busy London commuter train. Hovering your naked, vulnerable flesh over the crusty seat, feet slopping in an inch of urine, less than six inches and a cardboard wall between you and the other commuters who can hear your every effort. Every anal assertion. Only then to wipe up with the last half sheet of paper and a sock you sacrificed for the greater good, before realising you can’t flush the sock and having to take it with you.*

Jaywalking
Not, as mentioned earlier, the prohibited crossing of the gargantuan, straight roads. This refers (reefers) to a different cultural difference. Jaywalking, we joked, in London means hitting the pavement with Jamaican Old Holborn on the burn. Las Vegas stinks of weed, because it is legal there. So while jaywalking is a crime there, it is also legal, and vice versa in England. Bizarre.

Circus Circus
It was in Fear and Loathing in Las Vegas for Christ's sake. It's a neon acid trip, outdated, and looks and feels like it "passed" every Krusty the Clown safety check. I did grow fond of it, in a weird way.

*I promise despite the level of detail and odd socks I own, this story is entirely fictional.