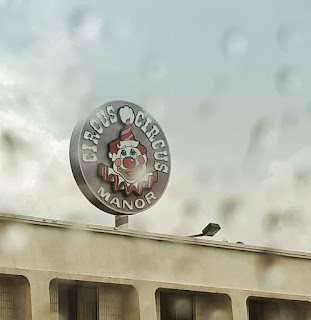 This was initially written for work, but for reasons which will become obvious, is now going out on my blog instead.

I’ve been to America before, twice. Once was a 6000 mile road trip round the south eastern states; it was amazing for many reasons. That I don’t drive was just one of them. New York in my early teens was fun, but New York is a lot like London, where I grew up. It was safe to say I had never been somewhere in America I have despised. Las Vegas is totally new to me though and the Hellraiser annual Las Vegas “sparring party” has been going out with Mickey Helliet since 2010. Mickey has been going since long before then, and has attended big fights out here. Sadly that’s not an option this time, but it offers a unique opportunity to both the boxers who benefit from sparring at Floyd Mayweather’s gym, and me, as a writer and boxing fan. I was extremely excited to be coming out here.


This blog is my account of our time here. Other accounts may differ.

Myself, Mickey, Josh Ejakpovi, trainer Sam Fleetwood and two of his young amateurs Clay and Tyler all travelled from Gatwick. Asinia Byfield flew from Manchester. None of us know why. Including Asinia. Josh turned up in a wooly hat and scarf, apparently unaware Las Vegas is in a desert, despite having been there before. The flight was good, for a ten hour flight, and everyone made it through customs without saying anything stupid. By everyone I mean me.

Americans are incredibly friendly, no more is this true than in Las Vegas. As a cynic I believe this is because here they assume you’re coming in loaded with dollars to throw at the nearest person. They are, of course, mostly right. But I am miserable and skint, so good luck to them. This doesn’t go anywhere in particular but I think it is worth bearing in mind for the rest of my blogs on this place.

Asinia had never been to America before and displayed this in his usual demure way. He raced into the nearest shopping centre to tell a man running a sports memorabilia shop that he should take a photo of him because, “In a year it’ll be worth a million dollars”. Asinia does not lack for confidence, but he wasn’t done there. With cries of “tell ‘em Greg!” we wandered into a boxing gym, City Athletic Boxing. Purely by happenstance, but they were very nice and allowed us to wander around and watch their sparring. We were told that Jesse Vargas is their pro, the former world champion. He wasn’t there at the time, but Asinia and Josh immediately offered to spar him to gym staff. Gotta love the moxie: that’s why they’re Hellraisers.

It was probably for the best that Jesse wasn’t there, from his perspective. Within the hour, having followed up his gym request through Twitter, Asinia was spitting feathers that he hadn’t heard back yet. Incredulous at the disrespect he’d not been shown. It was showmanship from D’Ghost, but hopefully they do spar, it’ll be a war. He’s come with that expressed intention; to do damage to his opponents.

We moved on, in search for a seemingly fictitious boxing shop somewhere across the road. Saying something is “across the road” on the Las Vegas strip is like saying Reading is “next to” London. During the long trek, I had time to realise that Las Vegas is at once both beautiful and abhorrent. False, fake and fantastical. I’m finding it hard to get over how little I like the strip and the big casinos. They’re all smashed into this one small place, like a cross between debauchery and a theme park, or creche. Where small children weave through huge casinos while adults sit pouring money out of their pockets. It’s just a very strange vibe, all very “new money”, no soul, no class. Those who know me will know my dislike of nightclubs; well guess what Las Vegas is…  But we aren’t here for meaning, we’re here for mauling.

The guys were chomping at the bit to hit. I may never acclimatise to the lack of any depth to Las Vegas, but I can get on board with boxing. If the Sin City is good for one thing alone, and it is from what it's shown me this far, then boxing is it. We returned en masse to City Athletic Boxing, who again were very lovely and accommodating. Asinia, Josh, Clay and Tyler used the gym to warm up before heading off to Mayweather’s to sign up for sparring. How that goes we’ll see soon.

But to my first impressions, and a caveat here in that I am often a grumpy sod; prone to hating things at first. Las Vegas is great for boxing, probably. I haven't seen much yet. That's as nice as I can be. I’d love to come here for a big fight. Although only for that. As a place I’m not impressed, this is the end of days, a mob created, gaudy, gross erection of capitalism. Trump has a giant gold tower standing proud here, its not the worst tower to look at. That’s all you need to know. Las Vegas is a place where Trump doesn’t stand out as ostentatious. Americans are friendly, but then I grew up in an area where not being mugged was a friendly night out.

My happiest times here have been watching the guys smash pads and bags in the gym. If only Las Vegas were one big gym, not one big Mall.