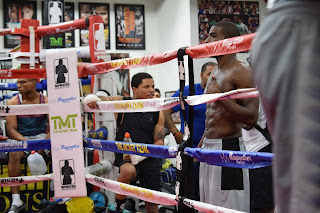 Just for Nicky, this one has no swears in!

After what was honestly something of a disappointment that Vegas is not really for me, I felt had to move on. I'm here for two weeks. I’m aware I may have put the disappointment in slightly stronger terms in previous posts. I’d thought I might really like it, if I don’t know me by now, I never will. Which is a whole other problem I’ll deal with shortly after my last breath. So it was on, on, on to the next one.

The next one happened to be boxing, fortunately. The sole reason I’d come here, which was a consolation to me. I do not box, but then neither does Conor McGregor and that’s not stopping him coming to Las Vegas on a high. I also have a scheduled spar with Hollywood Josh. Which will be fun. Hellraiser, through Mickey’s connections, are encamped at Floyd Mayweather’s gym, which is pretty obviously a centre for excellence. Sam Fleetwood had a youngster called Tyler, lovely boxer, who took on an eleven year old with more belts than I own pants. That’s not a good comparison. But you get the idea, even the eleven year olds there are bastard good.


I don’t use bastard as an adjective for no reason. Bastard isn’t a swear. I bastard promise.

Josh Ejakpovi and Asinia Byfield are both incredible boxers, and great company. Josh and I have a foil we are hoping will translate into the show we’re piloting with the remarkably good Marcus and Mini Mammoth, and Asinia would be a fly on the wall documentary dream. He rarely passes a minute without doing something funny, deliberately or not. He's also a student of boxing, and can tell you more in five minutes than most could ever. They were both here, primarily, to smash the living breath out of locals in the squared circle.

The Mayweather Gym is a busy, competitive gym. By competitive I mean you prove yourself in that place, which is reasonable given the name it comes with. Other fighters screw you visually, check your work, and one suspects, want to see you fail. By “you” I mean Josh and Asinia, I may as well have been a bland painting on the wall. I don’t look like Floyd so I’m not in a painting on it, though. Day one was good but perhaps unremarkable, by sparring standards. Both faced decent guys and did well, but both wanted more, faster, sooner. Be careful what you wish for, some might say.

Day two saw Josh spar a local pro who was a little nervy, asking not to be filmed, and within 30 seconds complaining of imaginary fouls as Josh dominated him. A look at his record explained the reticence, only lost twice, both in his last two, most recently by knockout. Seemed like a nice enough bloke but I don't expect big things. We’d not seen the big names really, at this point, and yet all of a sudden the names walked in, unannounced. Floyd, Gervonta, Theophane, the top trainers… Asinia came running over, he’d won the war of sparring Gervonta.

Listening to Floyd, which isn’t an option if you’re in his gym to be honest, you’d think nobody ever wants to step in with Davis. Asinia bucked this trend, he couldn’t bastard wait. I’d like to point out again that bastard is not a swear word. I’m a bastard, although only in the eyes of God. So I’m not. Asinia got in the ring with a man four weight divisions below and 5 belt levels above him. A man who has knocked out 17 of 18 opponents including the notably durable Liam Walsh on Walsh's home turf. Asinia was in the Doghouse, Tank's turf. D'Ghost is lean at 154, Davis looked like a welterweight, in all honesty it was more even than the tape may suggest. The gym shut down and the English were herded to one corner. The Seps enveloped us in their brash way.

It began calmly. But Asinia’s trickiness and refusal to cower made the home crowd mad. Really mad. It was an atmosphere few pro fights I’ve been to can rival. Asinia not only took it to Gervonta, but he outworked him mentally, which it became obvious is what the gym prides itself on. Almost bullying, but not, because you asked for it. Shut up and put up, It’s uniquely American. But hey, this gym has more world Champions than London’s currently combined.* I’ve never been as nervy, Gervonta wallops like a son of a bastard. Scary tough.

DOG HOUSE! While the guys whack the floor, pounding on canvas. That’s hardcore, toughen up. DOG HOUSE. DOG HOUSE!  Ten to fifteen tough rounds fighting later, Asinia stood unbowed, unbeaten and very much more respected by the Seps. He got a lot of love, deservedly.

To return to the point of my writing in this piece, I was happy watching the sparring. This is why I am here. I love watching boxing, even if it is in a hole like Las Vegas. I love hanging out with people who love boxing as I do. Like Mickey Helliet, like Asinia and Josh, like Sam, like Tyler and Clay. This is my bread and butter. This is where the years of wandering, of doing jobs I hate come back to me. I get my money back in Asinia’s spar, in Josh’s honesty, in Mickey’s insight. That’s why I am here here.

And suddenly I am humbled. Remembering I owe so much to see these things, to be part of what I never thought I would.

Never let dreams lie. I am hopeful again. But not for Las Vegas, it is unlikely to change on my account.